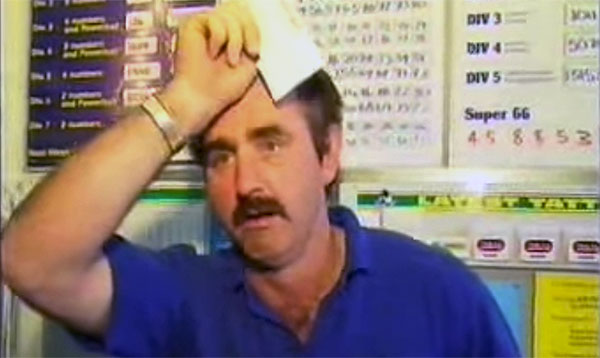 For most of us, winning the lottery in and of itself would be enough to change our lives forever; for Australian-native Bill Morgan however, winning the lottery is just one of many life-changing experiences. In 1999, 37 year old Bill was a truck driver, living in a travel trailer; tragedy struck when he was involved in a violent accident, through which he ultimately survived.

While he and the doctors were ready to celebrate a miracle, things made a turn for the worst when Bill suffered an extreme allergic reaction to medication he was given in order to stabilize his condition, ultimately leading to his death. His heart had stopped, and he was considered to be clinically dead for fourteen minutes – a considerably long time for doctors to get his heart going again.The doctors were successful in reviving Bill, but there was much concern regarding the state of his mental wellbeing; when people suffer clinical death for longer than a few seconds, their brain becomes starved of oxygen, and often suffers severe damage as a result.

Once Bill’s heart was started again, he remained in a deep coma, and doctors recommended he be pulled off of life support, as they believed he had little chance to survive the coma. However, he remained on life support and miraculously awoke from the coma just 12 days later, entirely fine with no detectable brain damage. Doctors had never seen anything like it, but nevertheless Bill walked away from his hospital bed with little to no repercussions from the events that transpired.

As if surviving an auto accident and awakening from clinical death and a coma wasn’t enough to change Bill’s life forever, he soon became engaged to his long-time girlfriend after his near-death experience. To celebrate, Bill bought a scratch-off lottery ticket and won a brand new car worth around $24,000 (according to inflation). Winning the lottery in conjunction with the near-death experience was enough to get Bill mass media attention, and he was asked to guest on a Melbourne news station. During his segment on the show, Bill was asked if he would scratch another lotto ticket on camera so that he could re-enact his reaction to winning previously, to which he obliged. As he scratched the ticket, he was thinking about what to say to the camera when he realized something nothing less than astounding – he may not have won a car, or a second chance at life, but he did win $250,000 – or about $350,000 according to inflation. Some of the people in the studio who saw the events transpire live on TV thought Bill was joking, but he wasn’t; on his lottery card, it clearly showed that he had yet again won the lottery.

For some, having a near-death experience would be enough to change their outlook on life forever, and for others, winning the lottery would do the same. For Bill however, it seems his life has continued somewhat as usual – although he is no longer a truck driver. Reports say that he is still with his then-fiancee, and they are happily enjoying their lottery winnings nearly two decades after Bill Morgan’s near death experience and double-lottery winnings.