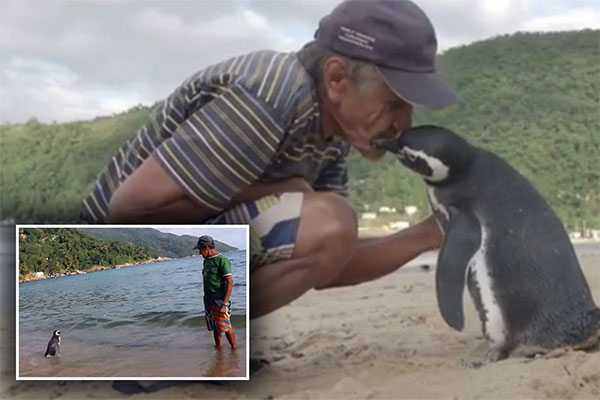 Out of what could have been a sad reminder of pollution and the plight of animals came a heart-warming story of rescue and the subsequent forging of a friendship between man and animal.

It was in 2011 when pensioner Joao Pereira de Souza, now in his 70s, came across a starving South American Magellanic penguin that was covered in oil and unable to survive without help. Souza took the penguin to his home and spent the week cleaning its oil-ridden feathers and nourishing it with food and water. During this period, a lasting friendship blossomed.

Dindim, the name given to the penguin, refused to be released and, instead, spent the next 11 months with the pensioner, laying on his lap, allowing him to shower him, feed him sardines, and pick him up. He does not allow anybody else but Souza to come so close, which led Souza to believe that the penguin loves him.

Dindim often ventures back out to sea for days, weeks, and even months, but spends the majority of his time with Souza - usually around 8 months of the year. Every year, Dindim travels to the penguin's known breeding grounds frequented by South American Magellanic penguins, which is usually much further south, around the Patagonia coasts of Chile and Agentina - around three to five thousand miles away.

I’m flattered Dindim is happy to exchange his home with thousands of other penguins every year to find his way here to spend one-to-one time with me, it’s a very special relationship.