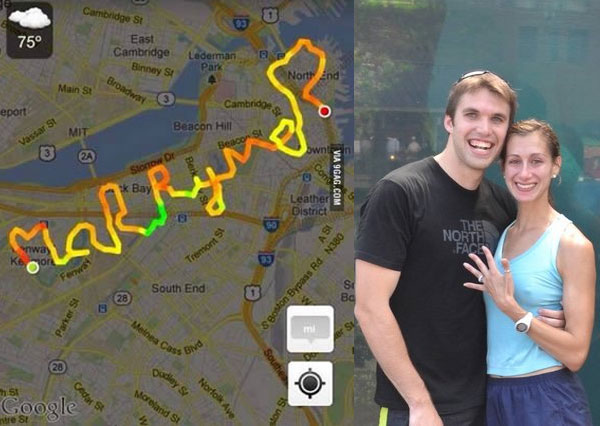 Commissioned by the U.S. Department of Defense, GPS entered development in 1973. Since it became fully operational in 1995, it has seen many uses around the world. One user of a GPS tracking device, a runner named Tim Kaijala, found another use for tracker... by using it to propose marriage to his runner girlfriend.

Kaijala, 26, from Boston, MA, took his girlfried, Joanie Bohlke, 33, for a run on a cleverly mapped out the tailor-made route that took the pair through locations that the couple had shared memories. Using his GPS-enabled phone, the course was tracked and his plan came together.

At the end of their run, Kaijala handed his phone over to Bohlke to 'show' her the unusual route that they'd just ran. To her surprise, it read: "Marry Me?"

Kaijala told Michigan Live that the route "took quite a bit of planning," apparently taking weeks to figure out. He'd met Bohlke two years prior at a Boston track club.

Of course, the proposal was accepted and the couple are now married.