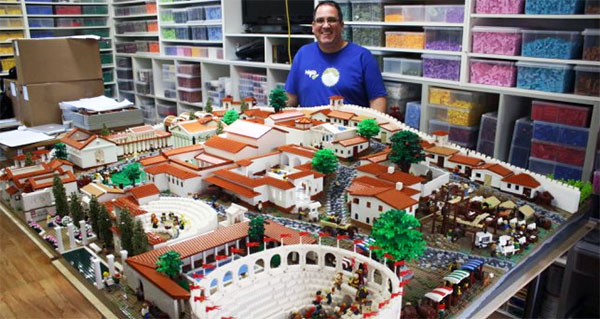 Ryan McKnight, a Lego enthusiast who has been nicknamed 'The Brickman', spent 470 hours building brick-by-brick a Lego replica of the historic Roman town of Pompeii.

The mammoth replica shows what the town looked like just before Mount Vesuvius' famous eruption disaster in 79AD. Consisting of more than 190,000 Lego bricks, the construction was made for the Sydney University's Nicholson Museum and will be used as a learning aid for students at local schools and universities.

It also features some tactically hidden easter eggs, including Doctor Who and the Tardis.

After the disaster of 79AD which wiped out most of the local population, Pompeii lay buried under feet of pyroclasts and dirt until its rediscovery in 1748.