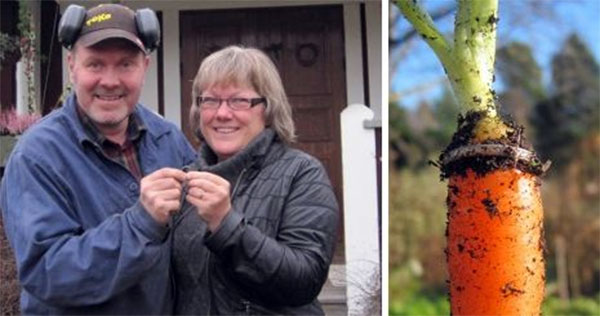 In 1995, a Swedish woman called Lena Paahlsson lost her beloved wedding ring that she had designed herself.

The white-gold band ring featured seven small diamonds and was priceless to her, but misplaced it when she was in the kitchen on Christmas day after taking it off to bake with her daughters.

Lena and her family searched high and low to find the ring - even taking up the floor tiling during renovations specifically to search for it. Alas, they could not find it and for years it was lost.

However, one day 16 years later, whilst pulling up carrots in her garden, Lena spotted a carrot that was garnished with a peculiar gold band. The gold band was, in fact, her long-lost ring.

The carrot was sprouting in the middle of the ring. It is quite incredible.
- Husband Ola to local newspaper Dagens Nyheter

The couple speculate that the ring was accidentally picked up from the kitchen sink in the midst of vegetable peelings, which were subsequently turned into compost or fed to the family's sheep.