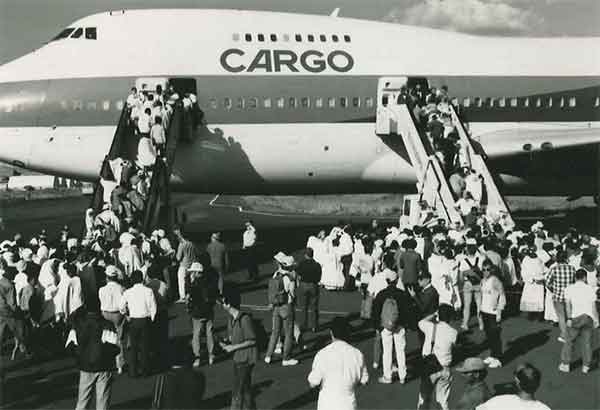 It was 1991 when the Ethiopian government was very close to being overrun by the Eritrean and Tigrean rebels. Jewish organizations from around the world voiced their concerns for the Jewish Ethiopian population. Israel, the self-declared Jewish state, saw the deteriorating political instability and uncertainty for the safety of the Ethiopian Jews, and so sprung into action to save those who they considered their people.

The operation was called "Operation Solomon" and involved 34 Israeli aircraft. It became known for its audacious execution, successfully airlifting 14,325 Ethiopian Jews to Israel over the period of 36 hours.

During the operation the record for the most people onboard a plane was broken when a Boeing 747 took off with 1086 passengers. It landed with 1088 passengers, because two babies were born midflight. Three others were born aboard the other flights.

There had been a previous covert evacuation of Ethiopian Jews performed by Israel in 1984, called Operation Moses, but it was smaller in scale.