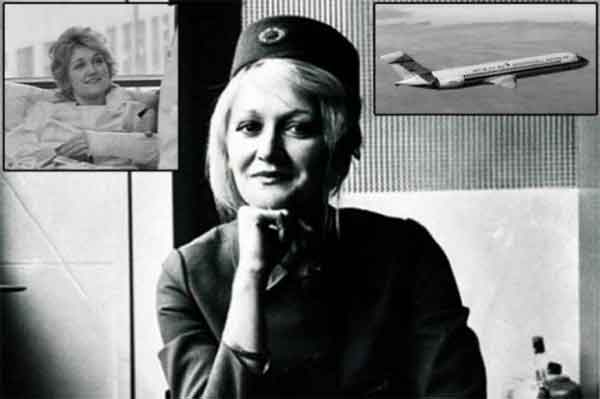 On January 26, 1972, Vesna Vulovic was just an ordinary flight attendant who was catering for passengers on a routine flight aboard a Yugoslav Airlines DC-9 aircraft that was heading to Copenhagen.

However, extraordinary circumstances ensued after an explosion tore through the aircraft while it was 33,000 feet above Czechoslovakia, hurling Vulovic towards the ground at high velocity.

Her last memory was greeting passengers as they boarded the flight which, strangely enough, she was not scheduled to be on, after a mix up with another flight attendant with the same name.

Vulovic was found alive with serious injuries by rescue workers who were shifting through the mangled segments of the aircraft. None of the other 22 passengers survived.

It is said that her miraculous survival was made possible by the fact that she was wedged between her seat, a catering trolley, and a section of the aircraft which made her landing on a snowy incline more graceful.

The explosion remains a mystery and nobody claimed responsibility. In 2009, German journalists speculated that the Czechoslovak air force may have accidentally shot it down.