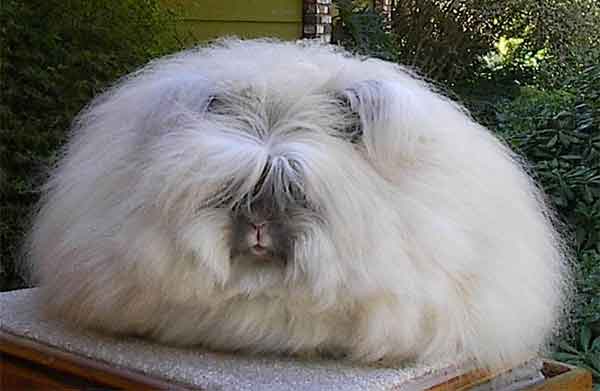 Believe it or not, the Angora rabbit seen in the pictures is an actual breed of rabbit.

Originally, Angora rabbits came from near Ankara, Turkey - same as the Angora cat and Angora goat. It has been bred so extensively for its long, wooly fur, that it can reach gigantic, fluffy proportions.

Nowadays, Angoras can be found around the world as they've become fairly popular with breeders and pet owners. They're also have uses beyond being a household pet, with hobbyist spinners having one or two for wool spinning.

In China, they've even been used industrially, spurring claims from animal rights activists of unfair treatment during the removal of the fur.

Angoras are generally easy to look after as a pet, but their fur can grow as long as six and a half feet in diameter, so proper grooming is vital to keep their fur from matting and becoming unsalable so that the rabbit is able to live comfortably.