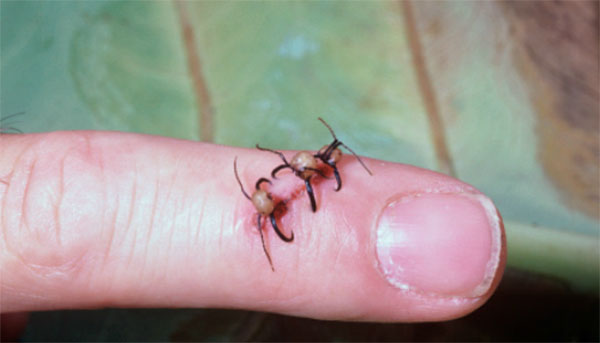 Often the feature of wildlife documentaries, army ants muster terrifyingly large colonies that are constantly on the move, pulling under any unlucky critter in their wake.

However nightmarish and intimidating they may appear, various tribes local to these kinds of ants (specifically dorylus) in East Africa have made good use of them - by using them on their wounds as emergency sutures.

If someone has caught themself on a bush or cut themselves on a rock, they can swipe a couple of soldiers from the ranks of an army ant colony and position several of them so that they bite down along either side of the wound in a similar fashion to modern medical staples. They then break off the ant's body, which unfortunately kills the poor critter while their jaws remain locked in place.

The grip of the soldier ant's jaw is so strong, it can remain securely in place for several days while natural healing takes place, and can be replaced if needs be.