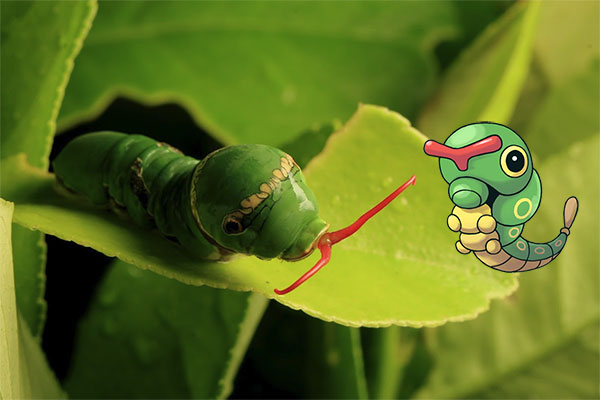 Nature certainly has an array of animals that have evolved with funky attributes, such as the the extremely cute pygmy gerboa, and the raccoon dog that looks like a raccoon, but is actually a dog!

To add to the list, there's a caterpillar that actually looks like Pokémon's caterpie. The caterpillar is the larvae of the Spicebush Swallowtail butterfly; an insect that can be found in North America that's not as exhuberant as its larval form, but still pretty nevertheless.

Predators of the Spicebush Swallowtail caterpillar are numerous, so it has evolved with a form and pattern that mimics, somewhat strikingly, a common green snake to offput any potential hungry predators. The placement of the dots on the caterpillar are similarly matched to those found on the snake, so it's easy to understand how this pattern evolved as predators mistake it for something that could potentially harm them. It just so happens, however, that it also looks very much like Pokémon's loveable bug, Caterpie.

To further add to this coincidence, when provoked, a y-shaped organ protrudes from the caterpillar as a defense mechanism - which also looks very much like Caterpie's antenna. This feature of the caterpillar is actually meant to mimic the snake's tongue, enhancing the illusion of its mimicry. At the same time, it also releases a foul-smelling odour that's said to be the concentrated smell of the spicebush plant which it feeds off. Apart from the stinky smell, the caterpillars are harmless to humans.