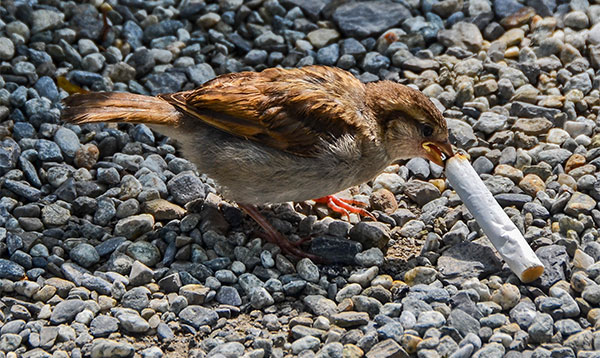 It has been well documented that birds preferentially line their nests with vegetation that's rich in parasite-preventing compounds, but researchers at the National Autonomous University of Mexico have observed city-dwelling birds use cigarette butts - and there's a reason why.

The team examined the nests of two common bird species on the North American continent and measured the amount of cellulose acetate, which is a component of the cigarette butt. They found that the more cellulose acetate there was in a nest, the less parasites it contained.

They also performed tests to see if the cigarette's nicotine content was a factor by placing traps which contained cellulose fibres from either smoked or unsmoked cigarettes, because smoked cigarettes contain more widespread nicotine.

The traps with the cellulose fibres from the smoked cigarettes were indeed found to have less parasites.

This behaviour is another great demonstration of some animals ability to evolve and adapt to the world's changing environment, just like the urban crows that have been observed dropping nuts into traffic which subsequently crush them before the birds pick them back up and eat them.