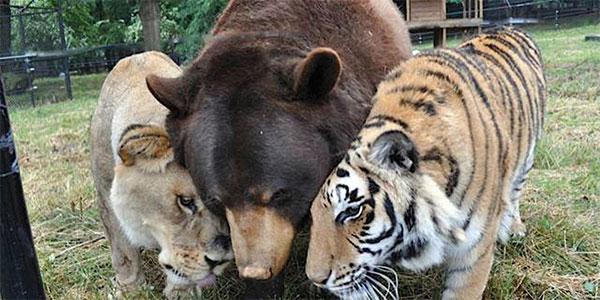 In the Noah's Ark sanctuary, there's a lion, tiger, and bear (oh my!) in the same enclosure.

They came together in their early infancy, when they were rescued from a drug dealer's basement who had unfortunately mistreated them.

Shere Khan the tiger, Leo the lion, and Baloo the black bear were rescued in 2001 and taken to Noah's Ark sanctuary in Georgia where they were treated for their injuries. Baloo suffered the worst injuries as he'd been strapped into a harness which had to be surgically removed because it had never been adjusted as he grew.

The animals found solace in each other throughout their neglect, so the zoo decided to keep them together rather than separating them. The animals continue to live together in a heartwarming friendship.

Interestingly, tigers and black bears are usually solitary animals. Out of the trio, only the lion is naturally a social animal.