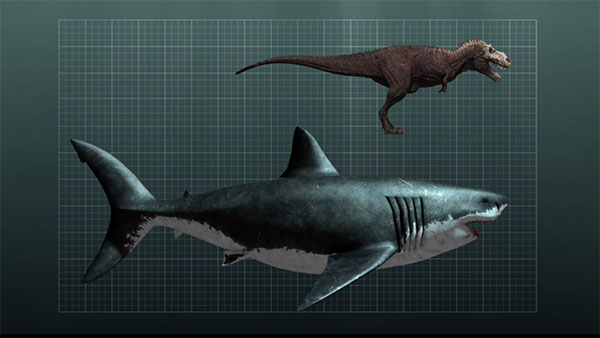 Prehistory is full of giant animals that can be fascinating as well as scary. One of the largest, and scariest, may well be the Megalodon - the largest shark that ever lived.

Megalodon, which means "big tooth", was a prehistoric predator that roamed the oceans that became extinct over 2.5 million years ago. It's the second largest predator to ever have roamed the Earth, second only to the sperm whale. It grew to be bigger than today's average city bus.

It also had a formidable set of teeth, with the average individual tooth measuring over 7.1 inches. Due to the fact that sharks shed their teeth thousands of times over the course of their lifetime, Megalodon teeth have been found all around the world and were first mistaken for "tongue stones", given their large size.

Researchers from Australia and the U.S. calculated that the Megalodon's bite was the most powerful of any creature that ever lived, with a force between 10.8 and 18.2 tons. To put this in perspective, the Great White Shark bites down with about 1.8 tons of force and a lion with around a mere 600 pounds. This means that the Megalodon could have eaten prehistoric whales with ease, chewing through bone as easy as a grape.