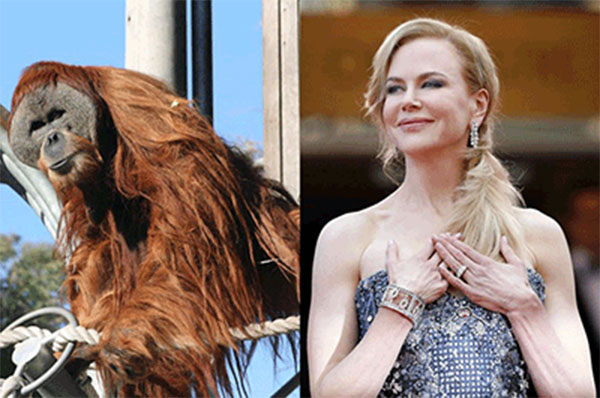 In recent times there have been quite a few viral videos and stories of interspecies 'attraction'. One alpha male orangutan at Perth Zoo joins the group of interspecies lovers by setting his eyes on humans. Specifically, humans with red hair.

It has been reported that he often eyes-up red-haired visitors at the zoo. One human in particular that has taken his liking is Nicole Kidman. Unlike typical behavior recorded among the flame-haired primates who typically toss the paper around, reports say that he specifically rips out pictures of Nicole Kidman and keeps them in his enclosure.

Hsing Hsing has a harem mate in his enclosure, but the relationship is described as "purely platonic" and it hasn't stopped him from eyeing up the visiting red-haired humans.

News.com.au claims that the 95kg diabetic ape has a human red head fetish - perhaps close enough considering that we share 97% of our DNA.