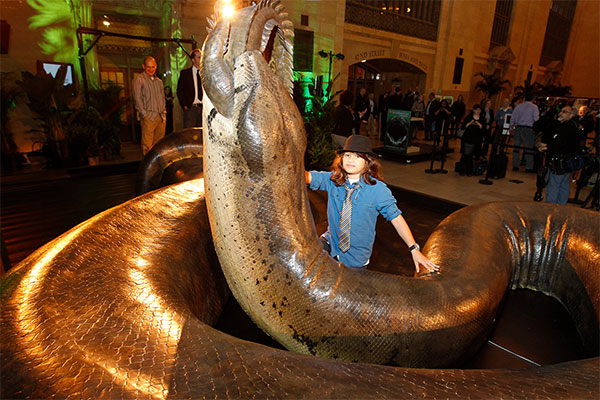 The Earth's paleontological history is rich with many interesting, unique, and darn right scary creatures that once roamed the land that we live comfortably. Right up there in the scary category, however, has to be the Titanoboa - a snake that lived approximately 60 million years ago.

Measuring in at 12.8 m (42 ft) in length, the Titanoboa was definitely one of the monsters of the Palaeocene period, roaming parts of what is now South America.

During its time, it would have roamed the lush low-lying rainforests that contained an extensive system of rivers that dotted the landscape.

Typical to other constrictor snakes, they hunted in ambush and caught any prey they could catch, killing it by asphyxiation (coiling and squeezing). Although only part of a jawbone of the Titanoboa was found, it would have had a set of large recurved teeth within its mouth that would have gripped down on prey, making escape impossible.

Owing to its size and weight, it would have been impossible for the Titanoboa to navigate the trees canopy, so it would have spent its time slithering around trees rather than trying to climb them.

Most likely prey would have been prehistoric crocodiles, lungfish, smaller snakes, birds, mammals, and turtles. However, it was unlikely that the Titanoboa feasted upon the Carbonemys, a huge turtle - approx. the size of a small car with a large, thick shell that probably evolved because of the Titanoboa threat - that roamed the area at the time.