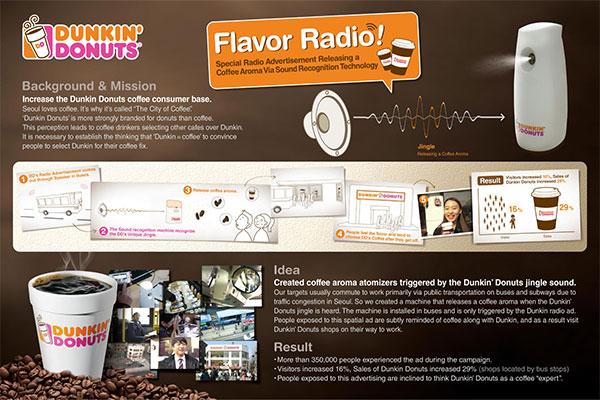 South Korea is one of the fastest-growing economies in Asia, thanks to its rampantly capitalist society full of technological innovation and a healthy consumer market at home and abroad. As such, advertisers are looking for ever more creative - or intrusive - ways to catch people's attention.

Enter Dunkin' Donuts 'coffee aroma' scheme that was piloted on buses in the South Korean capital, Seoul. Every time the Dunkin' Donuts jingle was played on the radio, a coffee aroma was sprayed into the bus to help people 'catch a whiff' of their brand; associating the smell of a cup of joe with Dunkin' Donuts' coffee.

It's quite clever. Coffee contains a fair amount of caffeine; a stimulant. For the same reason it gives many their morning pick-me-up, it works its magic on the brain's dopamine receptors - amongst others - which makes one crave more. Love coffee and notice how the smell can be very pleasant, perhaps even making you crave a cup? That's what the advertisers are trying to tap into.

Dubbed 'Flavour Radio', it was so successful that shops near bus stops reported a 29% increase in sales. 350,000 people were exposed to unique form of advertising during its run in 2012. According to those behind it, consumers were more inclined to think of Dunkin' Donuts as a "coffee expert".