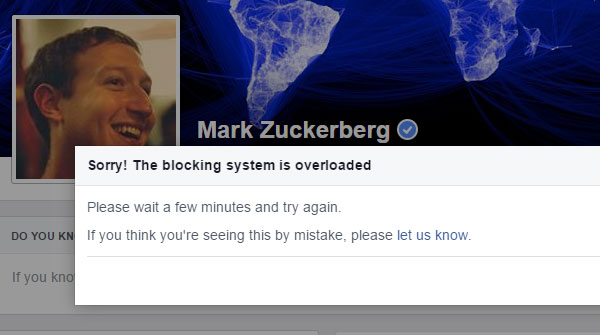 Mark Zuckerberg is the creator and CEO of Facebook, the largest social network in the world that has become an integral part of many people's social lives.

Being the head of the world's number 1 social network also makes Mr Zuckerberg quite a powerful man. So powerful, it seems, that you can't even block him on Facebook.

Mark Zuckerberg's profile is public and followed by millions of people. If, for whatever reason, you want to block Mark, you'll be presented with an error that claims that the "blocking system is overloaded".

Surprisingly, the inability to block Mark is not because he is the powerful God-like overseer of the network. According to Facebook, it's because Mark is being blocked by too many people or is the target of a blocking campaign. The error message is simply a protective measure that covers all accounts to protect them from these campaigns.