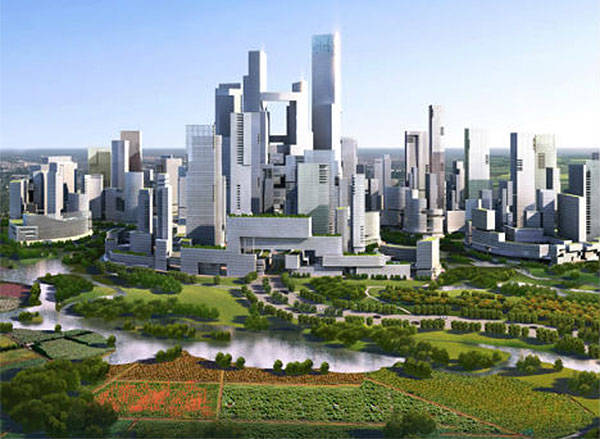 China is one of the largest and fastest growing countries in the world, sporting the largest population of any country. With their economic boom has come controversy over carbon emissions and pollution, but now it seems that China is shifting its focus to incorporate a more environmentally-friendly future.

There are currently plans to build a city, dubbed the "Great City", which will be built from scratch in a rural area outside Chengdu. It'll be car-free, featuring only walk-paths for pedestrians to navigate the green city that'll be surrounded by a pleasant green landscape.

The aim is to reduce, if not eliminate carbon emissions, with greenery accounting for 60% of the area for the planned city. Walking from the middle of the city to the outer green spaces will reportedly take only 10 minutes as the main living quarters will be located in modern high-rise buildings. There'll also be a mass-transit system for nearby urban centers.

"Accordingly, we've designed this project as a dense vertical city that acknowledges and in fact embraces the surrounding landscape—a city whose residents will live in harmony with nature rather than in opposition to it. Great City will demonstrate that high-density living doesn't have to be polluted and alienated from nature. Everything within the built environment of Great City is considered to enhance the quality of life of its residents. Quite simply, it offers a great place to live, work and raise a family."