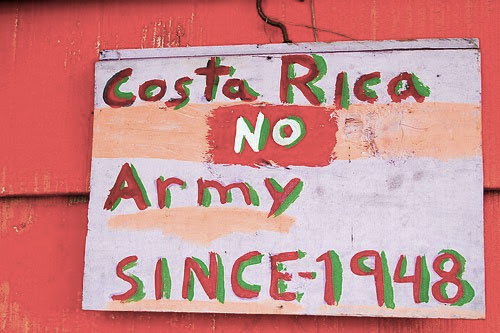 In 1948, the civil war in Costa Rica saw the US-backed rebel National Liberation Army rise up against the Costa Rican government that was trying to annul the results of the presidential results.

Upon victory, the National Liberation Army went one step further to solidify stability the country's new-found peace by abolishing the country's military. They also gave Blacks and women the right to vote and guaranteed public education for all.

The military's previous budget has been redistributed to education and culture.

On December 1, 1948, the abolition of Costa Rica's "military spirit" was symbolically ended in a ceremony that saw Costa Rica's leader, President Jose Figuerers Ferrer, break a wall with a mallet.

In the unlikely case that Costa Rica has a security crisis requiring military intervention such as an invasion, the United States has offered Costa Rica the discretion of using the US military.