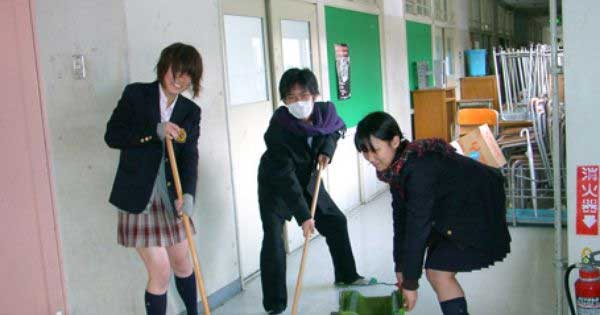 Around the world, especially in Western societies, school cleaning duties would be associated with the friendly-faced janitor. In Japan, however, this is not the case. As part of Buddhist traditions that associate cleaning with morality, most Japanese pupils are tasked with the janitorial duties of their school.

According to Alice Gordenker, an American parent living in Japan who writes for the Japan Times, she was struck when she was running thorugh her child's supply list for school when zokin (cleaning rag) caught her eye. Surprised, she queried her Japanese friend, a fellow parent, who responded, "Why is that funny? What do American kids use to clean at school? A mop?"

Such a norm were Japanese pupils' cleaning duties, they had assumed that the policy was universal. Wouldn't that be nice?

Each school may have different routines for cleaning duties, called o-soji, but at the school that Gordenker's child attends, o-soji begins just after lunch, lasting about 20 minutes. This happens most days, except for Wednesday and Saturday. The last day of the semester includes a longer version of o-soji, called osoji (meaning big cleaning). She reports that during cleaning time, cheery marching music is blasted through the school's public announcement system.

It's often reported that Japanese schools don't hire janitors, but contrary to popular belief, there are still non-teaching staff employed by the schools, called yomushuji. Their responsibilities are wide and varied, but also include the cleaning and maintenance of the schools.