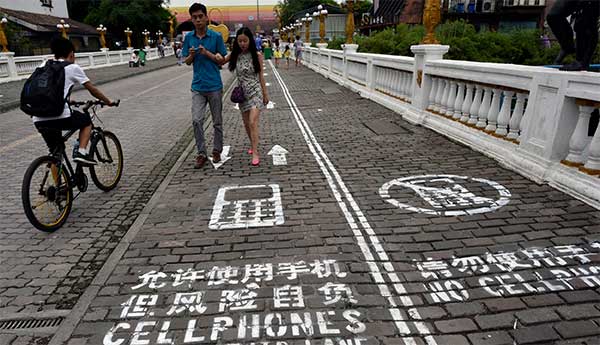 It's a familiar sight: seeing someone indulged in their phone while walking on the pavement. If there's anyone like me, the distraction can be quite hazardous when there's oncoming obstacles like lampposts and post boxes.

The Chinese city of Chongqing has come up with an ingenious, albeit drastic solution for the modern problem: a pavement dedicated to mobile phone users.

Similar to the concept of a bicycle path, mobile phone users walking along the arrowed pavement can safely indulge themselves in their technological habit without the worry of bumping into unwitting pedestrians.

The pavement is the first of its kind in China and was the creation of a private company called Meixin, who manage "Foreigners Street," a popular entertainment area of the city.