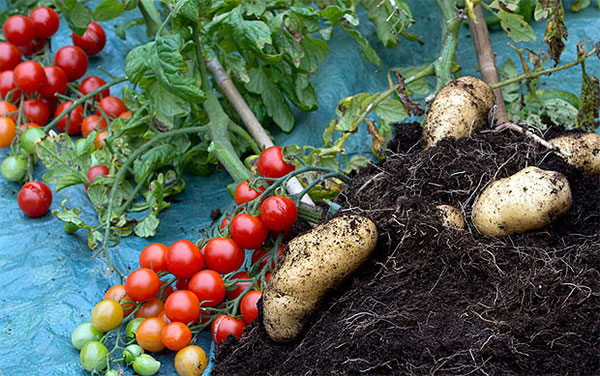 Sometimes referred to as the “Ketchup ‘n Fries” plant, the TomTato plant produces both tomatoes and potatoes, making it the first of its kind. The plant is not genetically modified, however it does undergo a process called “hand grafting,” which causes the plant to grow potatoes under the soil, and plump, red tomatoes on the branches of the plant. Grafting is the delicate process of combing two plants into one, and requires someone with skill and practice to complete properly. By grafting two plants, gardeners can give one plant the flowering capabilities of one, and the hardiness of another, creating hybrids that are resilient and offer fruits or flowers. Although both plants are part of the same genus, grafting tomato and potato plants is especially difficult, as the stems from each plant need to be around the same size for the graft to be successful.

Although grafting has been done in the past, the TomTato plant is the first plant of its kind to be sold on a large commercial scale, while originally it was developed and sold only in the United Kingdom, it is now available for sale all around the world (although often listed under different names, such as “Ketchup ‘n Fries,” or “Potato Tom”). When the plant was first developed, it was done with the idea that gardeners without large areas to plant small crops should not have to sacrifice growing one crop or another due to space issues. With the TomTato plant, gardeners with even the smallest growing area can have two different harvests every season. The plant took over a decade to develop, as the first versions of the plant did not offer harvests with the best taste, however the plants now offer both tomatoes and potatoes that are said to taste much better than their store-bought counterparts. During the first stages of development, developers of the plant did not have any faith in the lifespan and fruiting capabilities of the all-natural hybrid, but with years of practice and research, the plants can now be commercially bought and easily grown in anyone’s garden, whether they be a novice or an experienced gardener.

The plants are purchased as saplings, and they last for one season. When the tomatoes on the plant above ground are ripe and ready to eat, the potatoes underground are also ready to be dug up and turned into whatever delicious dish the grower chooses. According to some of the plant’s growers, one plant can produce up to 500 tomatoes and about 4.5 pounds (2kg) of potatoes per season, which is considered a substantial crop for a plant of this kind. The success of the plant has led to numerous online guides teaching readers how to graft their own TomTato plants, however the process takes a lot of practice, and is not easy by any standard, so for growers wanting to ensure a healthy TomTato plant, it’s probably best to purchase from a reputable grower. Perhaps the most important part of the TomTato plant is that is entirely non-toxic. A poison known as alpha-solanine is often found in both tomato and potato plants, however researchers in charge of developing the TomTato plant were careful to ensure that the plant has been certified non-toxic before being sold to the public.

For growers looking to save room in their gardens without sacrificing variety, the TomTato plant may be the perfect solution. The plant is easy to grow, affordable, and available in many countries around the world. With the success of the TomTato plant, it is very possible that growers will start seeing similar plants which produce two different crops on the market as development improves, but for now those looking for a novelty plant with a lot of utility, the TomTato plant is an excellent addition to any garden, as well as a great talking point for those who decide to grow it.