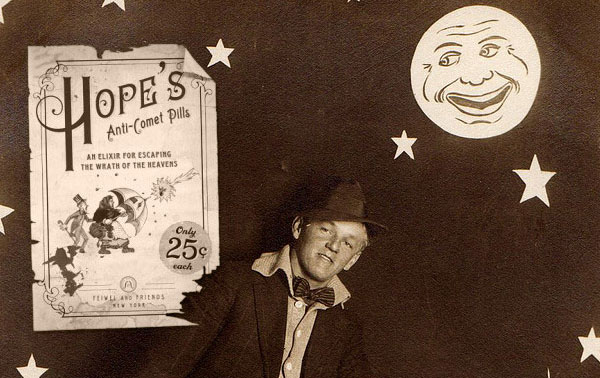 In the early 20th century, newspaper-fueled hysteria was common. One good example was the "Great Comet Scare of 1910" which saw people rushing to buy "anti-comet pills", "anti-comet umbrellas", and gas masks. For many, the newspapers had more than convinced them that the end was fast approaching.

The reason for this was because Halley's Comet was making its routine pass by the Earth. Technological advances in scientific equipment enabled astronomers to study the comet and its tail more intimately than ever before. Observations revealed that the comet's tail consisted of a highly poisonous gas called cyanogen. They determined that the Earth would briefly pass through the tail of the comet, but quickly concluded that this would be harmless. They claimed that the only noticeable effect that this would have on Earth would be more vivid sunsets for a while.

The media, looking for material to sell papers, didn't take on board the harmlessness of the event and focused on the fact that Earth would be passing through highly poisonous gas.

This sparked hysteria in the public and scientists tried to reassure them that nothing cataclysmic would happen, but the seed of hysteria had been sewn and opportunist con artists released products such as "anti-comet pills" and special umbrellas to "protect" people from the gas.

As the time came as the Earth passed through the comet's tail, people barricaded their homes and filled in cracks in the walls with anything that they could find to prevent air getting in from outside. The tabloid-fueled hysteria was being well exercised.

Earth did indeed survive without a single loss of life and the event remains as a reminder that accurate reporting is important in the media.