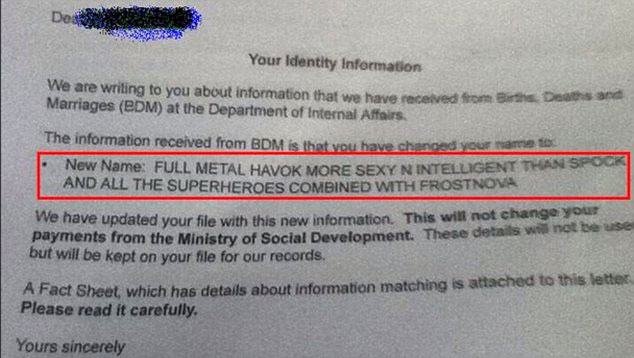 It's probably best that you don't go through with bets whilst extremely intoxicated on alcohol, as one unlucky New Zealander learnt while playing a drunken game of poker with some friends.

After losing a bet while playing the game, the intoxicated man, a 22-year-old from Dunedin, went through with the terms of the bet and actually changed his name to "Full Metal Havok More Sexy N Intelligent Than Spock And All The Superheroes Combined With Frostnova."

He had only found out that the application was successful when his passport expired. Mr Frostnova was then required to change the name on all his official and legal documents, such as his driving license.

A spokesman for the Department of Internal Affairs told the Telegraph that the name had met all the legal criteria and that the fee had been paid in full.

It wasn't the first time that someone has changed their name to something ridiculous. In 2008, a British teenager changed his name to "Captain Fantastic Faster Than Superman Spiderman Batman Wolverine Hulk And The Flash Combined".