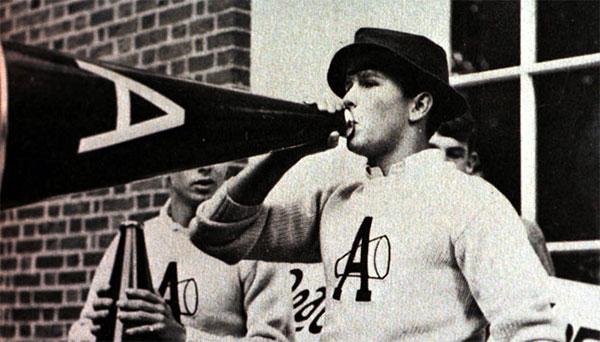 It's left to history to determine if President George W. Bush will be remembered for better or for worse, but what about for his cheerleading?

That's right - George W. Bush was a cheerleader during high school at Phillips Academy Andover and university at Yale University.

So good was George at rallying the jocks during his high school cheerleading career, he was promoted to head cheerleader.

Bush didn't sport much athletic prowess himself, but he maintained friendships with the players on the team and was a keen, outspoken supporter.

His old classmates speculate that his cheerleading career was an important precursor to his political career.

George W. Bush's presidency ran from January 20, 2001 to January 20, 2009, witnessing 9/11 and overseeing the Iraq and Afghanistan Wars. During his period as president, he became somewhat notorious for his guffs, giving rise to the term Bushism.

Most Bushisms were during speeches or interviews when he unwittingly used grammatically incorrect words and sentences, but also include, for example, when he attempted to walk through a locked door after an important press conference, stuck his tall finger up at a camera that was rolling, and also when he had a shoe thrown at him during press time.

Two of our favourite, quotable Bushisms:

"Rarely is the question asked: Is our children learning?"
- Florence, South Carolina; January 11, 2000

"They misunderestimated me."
- Bentonville, Arkansas; November 6, 2000