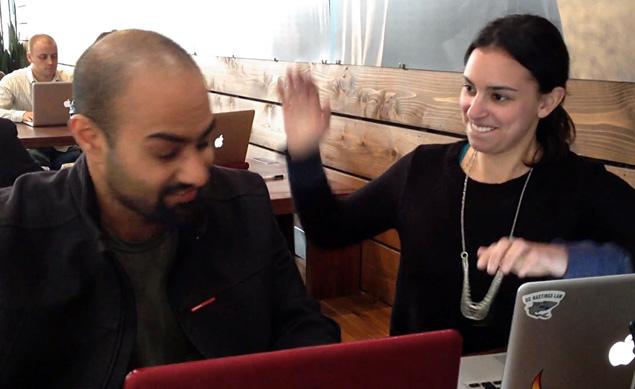 We all have that one habit that we just can’t seem to shake, whether it’s nail biting, obsessive selfies or maybe using too much social media.

Maneesh Sethi, computer programmer and blogger, one day decided he needed some extra help to cure him of his Facebook addiction. He had calculated he was spending around nineteen hours a week wasting valuable time on Facebook and other social media sites. So he posted an advertisment on Craigslist in order to hire someone willing to monitor his online habits while he worked at his computer. Of course, with such an interesting ad, he received hundreds of emails within minutes but he eventually narrowed down the pool and choose a candidate. He now pays a female employee around eight dollars an hour to slap him across the face if she witnesses’ him wasting time on any social media site.

Sounds downright crazy, right? Well, yes, it kind of is. Most people don’t want to admit that they might need some extra help to cure them of a harmful habit, but such was not the case with Sethi. He claims that this unusual motivation system has helped him to boost his productivity from just thirty-eight percent a day to a staggering ninety-eight percent. That’s a hefty bump and he claims it has everything to do with getting slapped for being on the wrong site.

Research studies have shown that Sethi might just be on to something. Studies have shown that the average worker whose job involves sitting behind a computer, often without any supervision, are only productive for about three days each week. The other two days are lost when workers are on sites like Facebook or other social media. Those two days could be used more productively and that’s the whole reason Sethi has hired someone to monitor him. He calls it “supervision from a stimulated authority figure”. In other words, he’s tapped into the idea of having a boss or other authority figure monitoring him at all times in order to increase his productivity.

This idea is a sound one. Of course, most people will often work harder and be more productive if their boss is looking over their shoulder watching their every move. However, where Sethi is motivated by the ever-present threat of a physical assault from his employee who is paid to keep him on task, most people would cringe.

But perhaps utilizing this idea of Sethi’s in a non-violent way might pave the way for employees all over the world to increase their productivity and to stop spending so much wasted time on social media sites. Maybe we should all consider applying our own version of Sethi’s method of how to stay productive to our working routine and see what happens. This is especially effective for those who work in and around computers for the better part of the workday and homeworkers.