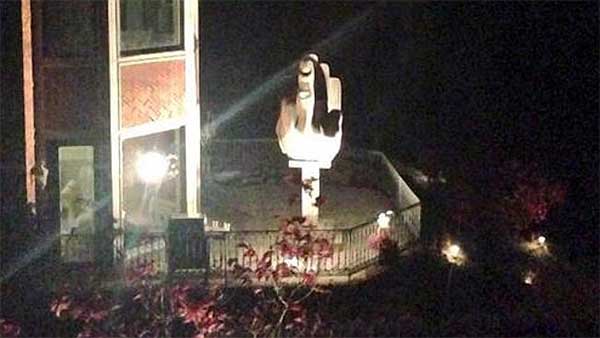 Quite frequently, divorces can be messy affairs. One vengeful ex-husband, Alan Markovitz, really did go the extra mile to 'get back' at his ex-wife.

The 59-year-old owner of a chain of strip clubs in Michigan bought a house next to his ex-wife and erected a giant sculpture of a middle finger that's permanently pointed towards his ex-wife's house.

While Markovitz claims that he's 'so over' his ex-wife, the sculpture is highlighted at night under a spotlight.

How psychotic do you have to be to buy the house directly next to your ex wife and then put a statue up like that?!?! Real classy alan

Markovitz is well-known around Detroit and runs strip clubs on Detroit's Eight Mile. He was targeted by the mob, who once put out of a hit on him and has been shot twice, including once in the face.