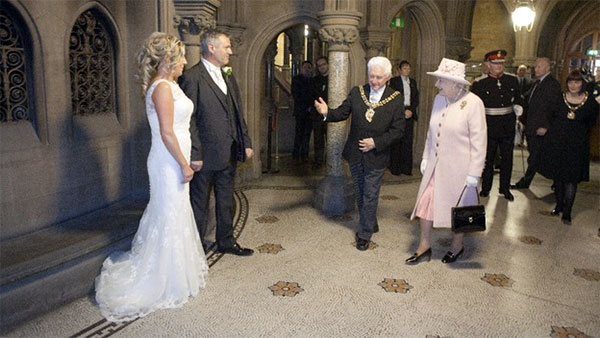 It's not an unheard of occurrence for a celebrity to crash an event. One couple, however, were royally surprised after they sent a wedding invitation to the Queen and she actually turned up!

John and Frances Canning's marriage took place at Manchester Town Hall on March 23, 2012, which coincided with a visit by the British monarch, Queen Elizabeth II and her husband, Prince Phillip.

Upon booking the event, the couple were not aware that the Queen, who was touring the Manchester as part of her Diamond Jubilee celebrations, was visiting on the same day.

As the Queen was having lunch in the same building, the couple invited the royal party by writing a letter, which Mrs Canning described as "a bit tongue in cheek in some ways," having "never ever wrote a letter to anyone, for any reason."

The couple were thrilled when they actually received a response stating that the Queen wished them all the best in the future, but would not be able to attend.

Not long after they'd been married, the couple were approached by a member of staff that told them that the Queen had actually accepted their invitation. Soon after, the Queen turned up with Prince Phillip, who enquired about their honeymoon plans, and congratulated the couple in what must be one of the most surprising wedding guest appearances ever