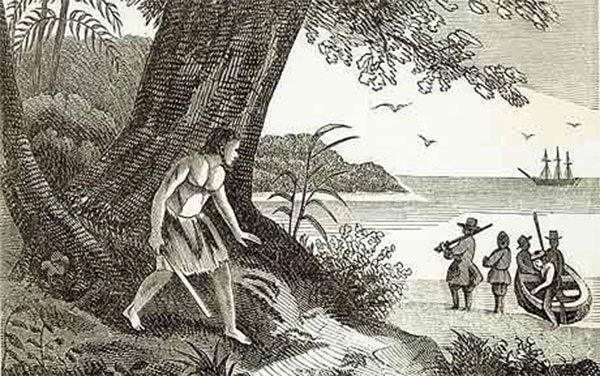 In 1704, Scottish Sailor Alexander Selkirk found himself marooned on a remote deserted tropical island in the Pacific for four years. It sounds eerily reminiscent of the famous noel Robinson Crusoe, which is thought to be based on Selkirk's real life story.

Selkirk was born in 1676 and was the seventh son of a cobbler. He founded his career in privateering against Spaish vessels off the coast of South America. In just a few years, his navigational skills had been proven so much so that he was appointed as Sailing Master on the ship 'Cinque Ports,' a fair-sized sixteen-gun ship that privateered against the king's enemies around South America.

He considered the expedition a disaster and the ship suffered significant damage at the hands of the Spanish after a few battles. Fearing the ship would sink and that his life was in danger, he made a request to be cast ashore on the next island that they came across. It was September of 1704 and Selkirk was officially a castaway on the island of Más a Tierra, which is known as 'Robinson Crusoe Island' today.

In the beginning, little did he realise that it would be four years until he would finally be rescued, and so quietly proceeded to pass the time by reading his Bible. A sense of horror must have dawned when no rescue party showed up.

With only rats, goats, and cats as his only company on the otherwise-lonely island, he prepared for a long-haul stay as the realisation of his potentially-long-term isolation took hold.

During his inhabitation of the island, there were at least two ships that pulled in to the island's bay. Unfortunately for Selkirk, he had already came out to greet them when he realised that they were actualy Spanish vessels and not friendly comrades. The sailors manning the vessels opened fire on Selkirk, but he managed to evade their shots and subsequent search parties before they continued on their voyages.

It was only on the 1st of February, 1709, when two British privateers anchored off shore, that Selkirk was finally rescued. After gazing upon the friendly ships, he set off his flares to alert them of his presence. A rather surprised search party found a wildman, too-long disconnected from society, dressed in goat's skins.

Selkirk's initial intuition that made him abandon ship in the first place turned out to be wise; not long after his stranding, the Cinque Ports was sunk.

The Post-Medieval Archeology journal reported that a campsite of a European occupant was located on the island, giving testament to the story. The archeologists discovered a fragment of a navigational divider, something which must have belonged to a ship's master or navigator.