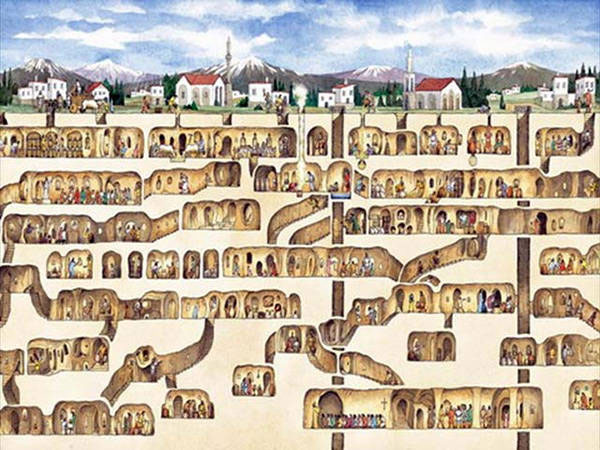 In 1963, a man in the Derinkuyu district in the Nevşehir Province, Turkey, unknowingly discovered one of the largest underground, multi-level cities ever, after he knocked down a wall in his house and discovered a room that lead to the amazing archeaological wonder.

It was built into soft rock over a millenium ago by people unknown, but the Turkish Department of Culture claims that the Phrygians may have built caves in the area as far back as the 8th - 7th centuries B.C.

Due to artefacts from numerous eras and peoples being found in the caves, such as those from Zoroastrians, Christians, and Muslims, it's hard to pinpoint the city's exact origins.

The entrance could be sealed off with giant stone doors in times of urgent need and it had the potential to shelter about 20,000 people, plus room for their livestock and food. The complex is complete with ventilation shafts and goes down almost 200 feet into the Earth. Each level could be closed off separately.

It's a generally-accepted theory that the underground city was used over centuries by different people during times of conflict.

Other underground cities have been found across Cappadocia, but Derinkuyu is by far the largest and most extraordinary.

Since 1969, the tunnels to the underground are open to the public and can be visited by tourists today.