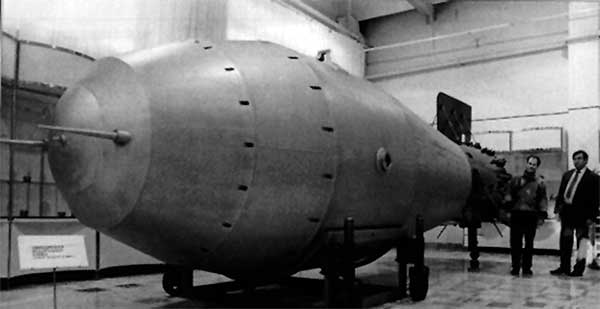 In the 1960s, it was the height of the Cold War, which saw an arms and technological race between east and west. Not only did this include the space race - which saw the United States put the first man on the moon - but also the awesome force of nuclear weapons.

The largest of those bombs was what the West dubbed the 'Tsar Bomba'. Codenamed Ivan (or Vanya), it yielded a payload of 50 megatons and was detonated on the 30th October, 1961. It was designed for a payload of 100 megatons, but this was scaled down for the test detonation due to the risk of nuclear fallout, which would have equated to around 26% of the fallout of all detonated nuclear bombs up to that point. In comparison, the largest device ever detonated by the United States was 15 megatons.

The bomb itself was 8 meters long and weighed more than 27 tonnes - so big that it was too large to fit inside the Tu-95's payload bay and had to instead be attached to underneath the aircraft, which had to be painted white to dampen the effects of the flash from the detonation. No guarantee for the pilot's safety could be given because of the uncertainty that the aircraft would be fast enough to get out of harm's way.

In fact, after the detonation, the Tupolev aircraft fell for more than 1,000 meters before the pilot could stabilize the aircraft.

The clouds beneath the aircraft and in the distance were lit up by the powerful flash. The sea of light spread under the hatch and even clouds began to glow and became transparent. At that moment, our aircraft emerged from between two cloud layers and down below in the gap a huge bright orange ball was emerging. The ball was powerful and arrogant like Jupiter. Slowly and silently it crept upwards... Having broken through the thick layer of clouds it kept growing. It seemed to suck the whole Earth into it. The spectacle was fantastic, unreal, supernatural.
- Soviet Cameraman

The effects of the bomb were felt thousands of miles away. The effects on Novaya Zemiya, the island the Soviet Union designated for nuclear testing, was catastrophic. All houses in the village of Severny, only 34 miles from the point of detonation, were completely destroyed. For hundreds of miles, damage to buildings - such as total collapse, windows shattering, etc - were reported, and radio communications were down for about an hour.