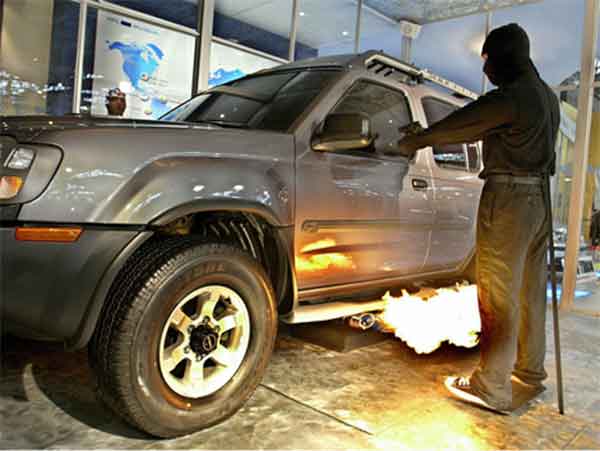 South Africa is a beautiful country, but is tarnished by high crime rates. In 1998, the murder, assault, rape, and carjacking rates per capita are among the highest in the world. This was when one inventor, by the name of Charl Fourie, had an idea; why not attach a flamethrower to people's cars?

The Blaster, as it was named, was designed to provide a fiery defense against carjackings, which were rife in the country at the time. The flamethrower had two attachments either side of the car that hurled out continuous flames to deter (and most likely harm) the assailant.

In South Africa, it is legal to use lethal force when done so in self defense while in fear of one's life. There's no restriction on owning a flamethrower.

The flamethrower proved controversial in South Africa. It has been claimed that the devices may even cause more harm than good, because the criminals may choose to murder the driver first, rather than merely threatening them.

Only a few hundred of the devices were sold, largely due to the high price tag. However, there are reportedly still cars in the country that have the attachment.