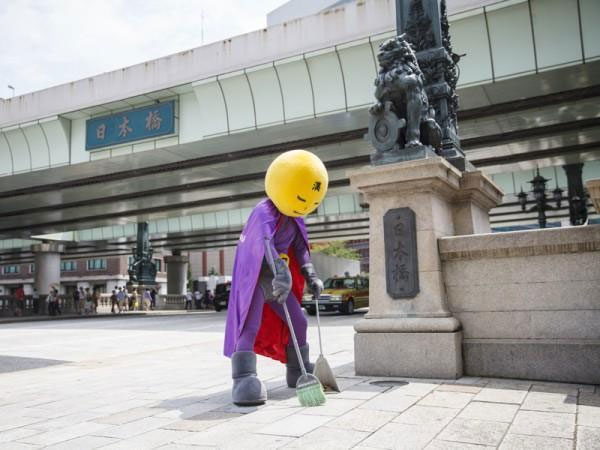 Japan's known for its cleanliness; Tokyo was even voted as having the cleanest streets in the world. However, for one man, that wasn't enough.

A mysterious costume-wearing man going by the name Mangetsu Man (translating as Mr Full Moon), has taken up arms with a bag, dustpan, and brush, with the self-declared mission of cleaning Tokyo's streets.

Other than cleaning up cigarette butts and the like, he also hopes to "clean up all the negativity in the world."

Attracting alot of attention, Mangetsu Man wears a purple costume with a cape and a large yellow head, reminiscent of a smiley. He has even spawned a following of other like-minded volunteers who clean the streets with him.

He mainly operates around what was Japan's most famous bridge, the Nihonbashi bridge. Just before the 1964 Olympics in Tokyo, a deeply unpopular expressway was built over the bridge and made the bridge unsightly.

Mangetsu Man, along with many others, are now petitioning the government to remove the expressway and restore the bridge's beauty.