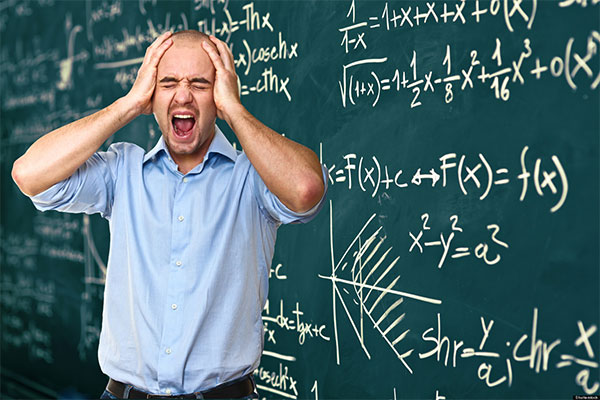 Do you find yourself feeling nervous before a math test? Feeling helpless and/or hopeless when doing homework? Perhaps you even have trouble sleeping?

These are typical symptoms of math anxiety, a phenomena that actually makes people perform worse at maths than they have the potential to be.

Scholars suggest that there's a strong relation between math anxiety and math performance.

Sometimes, it can even lead to avoidance of mathematics altogether, which can worsen the problem by inhibiting the gaining of necessary practice and knowledge for the task.

In one study, 13-year-old boys were found to have higher confidence levels than girls of the same age, which means that girls may be more likely to have math anxiety.

In the U.S., it's common belief that only a few "gifted" people can excel at maths. However, during studies, Asian children, teachers, and parents pointed to hard work, whereas their American counterparts pointed to ability.

There are a few measures that one who suffers with math anxiety can take. Before tests, or scenarios which math anxiety affects, try stretching to try and deep breathing. Not only does this distract you from the anxiety, but also calms the mind and body.

Try to get a good nights sleep. If you have difficulty sleeping, don't try forcing yourself - just read a book or watch TV until you feel tired enough to fall asleep. Avoid caffeine at the night time and try not to study too late. Sleep is important for learning and retention of information. Lack of sleep can affect performance too!

If the math anxiety interferes with your study or work on such a level that it significantly affects your grades or work output, try having a word with your teacher or superior to see what support they can offer. You never know, they may have had to deal with it in the past!