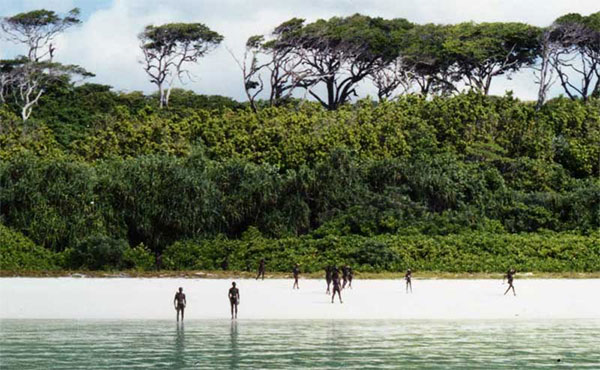 As the world's population grows ever larger, continually modernizing and expanding, there remains one of the last tribes to remain totally isolated.

The Sentinelese on North Sentinel Island, which is one of the Andaman islands that are located in the Bay of Bengal, have rejected all attempts by modern society to contact them. Using only bows and arrows, they aggressively make their stance on foreign intrusion clear to anyone who ventures near - some of whom they've even taken the lives of.

One of the earliest known recorded mentions was that of British surveyor John Ritchie in 1771, who noticed "a multitiude of lights" as he passed the island while aboard an East India Company ship. Later on in the same year, a merchant ship wrecked on one of the island's reefs. There were 106 passengers who survived and landed on North Sentinel Island, who successfully fended off attacks by the Sentinelese until a Royal Navy rescue party retrieved them.

Since then, several expeditions to the island have taken place by various groups.

In 1887, the first expedition was led by a government administrator Called Maurice Vidal Portman, who sought to learn more about the natives and their culture. They ended up returning to Port Blair with half a dozen captive Sentinelese, most of whom quickly fell sick due to contact with modern illness to which they had no immunity. Subsequently, they were returned to the island with gifts from their captors. Several more expeditions occured in the 19th century.

Beginning in the late 1960s, the Indian government sent 'exploratory parties' and attempted to establish friendly relations with the Sentinelese people. These visits ceased in 1997 after a mixed response.

North Sentinel Island was in the direct path of the tsunami that was triggered by the 2004 Indian Ocean earthquake. After fears that the Sentinelese could have been wiped from the map, the Indian authorities dispatched helicopters to survey the area and offer support if needed. The hovering aircraft was greeted by an adult Sentinelese who was wielding a bow and arrow in a clear gesture that informed the authorities that they were alive and that outsiders were not wanted.