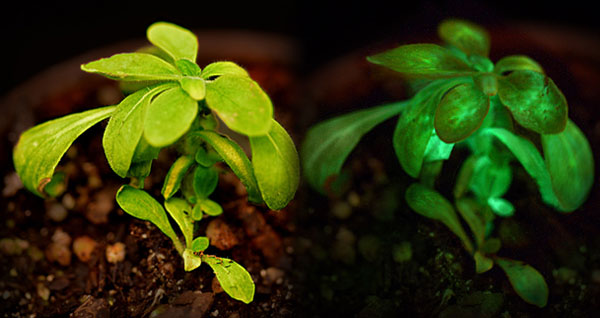 Avatar captured many people's imagination with the scenes featuring characters running through the beautifully-lit bioluminescent forests of Pandora. A concept that may seem to be out of this world, but one company is making it a reality.

Bioglow, a company based in St Louis, Missouri, have created the world's first genetically-engineered glow-in-the-dark house plant, which they plan to make commercially available in the near future, with bids for a limited release taking place late in January, 2015. Fittingly, they've been named Starlight Avatar.

In darkness, the plants emit a colorful glow similar to that of a firefly, and do not require chemicals or ultraviolet lighting. The company intends for the plants to have practical uses as a functional, environmentally-friendly light source, as well as being ornamental.

They were developed by scientists who introduced DNA from luminescent marine bacteria to the chloroplast genome of a common houseplant. The plants have a life cycle of two to three months.