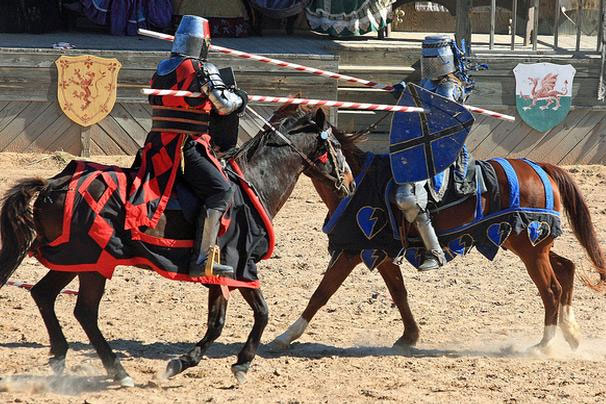 More associated with the Middle Ages and Medieval Europe rather than modern-day USA, Jousting is surprisingly the official state sport of the east coast U.S. state of Maryland.

When one thinks of Jousting, it's most commonly associated with the dangerous sport that sees two lance-wielding horsemen ride past each other with the goal of knocking the other competitor off their horse as they pass midfield.

However, the modern competitive jousting tournaments that take place in Maryland are "Ring Tournaments," where competitors have eight seconds to charge their horse at full gallop through an 80-yard course that has rings as targets that they have to thrust their spears at the rings to score points.

In 1962, Maryland announced that jousting was to become the state's official sport - making it the first state to even have one. Jousting has been popular in Maryland since the early colonial period, and most notably came to prominence after the Civil War, with tournaments being held regularly to this day.

Competitors of the modern jousting tournaments are called "knights" or "maids," many of whom dress in fitting costumes that are colorful, historic-looking, and even display emblems of their own team.

Whether the competitor be male, female, or even a child, they compete on an equal basis with their skill and horsemanship being the deciding factor of their class.