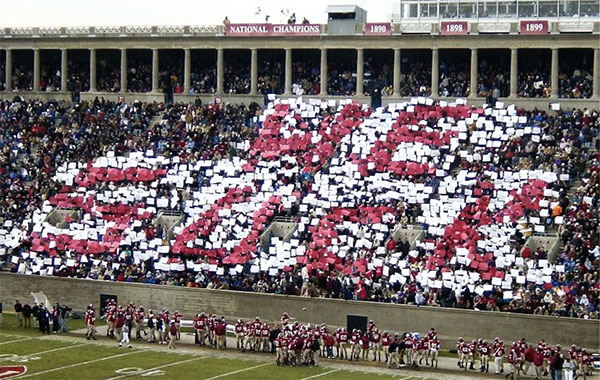 On November 20, 2004, the annual Harvard-Yale football game took place. Leading up to the start of the match, Yale students gave out placards to Harvard fans on the opposing side, telling them that they'd read "GO HARVARD." However, when they held up the placards together, it read: "WE SUCK."

The practical joke was the brainchild of Michael Kai and David Aulicino, both of whom were Yale students at the time. It was executed with the help of 20 classmates who disguised themselves as the "Harvard Pep Squad".

Afterwards, denial that the incident took place was rife at Harvard, but photos and even a video emerged of them raising the placards not just once, but twice.

Students at Yale even registered "harvardsucks.org" (and yalesucks.org to pre-emptively block any kind of similar counter-attack) which shows the video of the prank.

Unfortunately for them, however, Harvard won the game, 35-3.