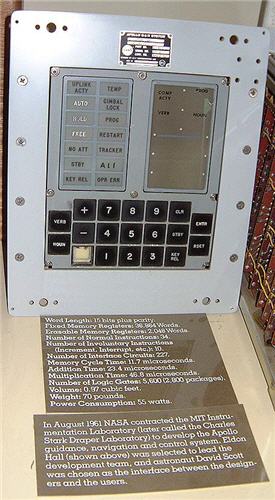 The first moon landing in 1969 by Apollo 11 was one small step for man, one giant leap for mankind, and a pole vault achievement for technological achievement.

The systems used for the moon landing were pretty (well, REALLY) basic, technologically speaking, by today's standards. Even a modern toaster with start/stop/defrost buttons has more computational power than the Apollo 11 system.

Yet it still managed to successfully deliver the first humans 356,000 km to the moon and then safely back.

The system that guided the spacecraft, the Apollo Guidance Computer (or AGC), was operated by simple commands that the astronaughts entered into the console, which consisted of nouns and verbs.