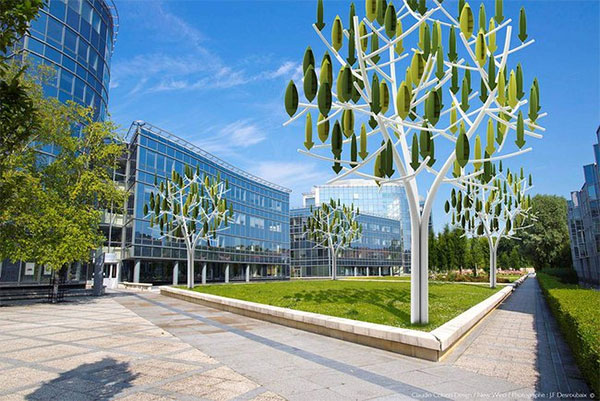 One of the most common-heard complaints about wind turbines is that they're unsightly and detrimental to the beauty of the landscape. One French entrepreneur has come up with an ingenious, yet simple solution.

One day, whilst outside, Jérôme Michaud-Larivière noticed how the leaves on trees were moving as they rustled in the wind. After experiencing a eureka moment, he assembled a group of engineers and created a tree with artificial leaves that contain miniature turbines that turn in the wind.

The tree is the end-product of three years of research. In 2014, they produced a working prototype that has been installed in a commune in Brittany. Eventually, Michaud-Larivière envisions the device being used practically in many places; from homes to city centers.

Currently, a wind tree will set you back about $35,000. Michaud-Larivière notes that it is profitable after a average of 7.8mph winds over a year.

The product will be marketed in 2015. In May of the same year, the invention will be installed at the Paris Place de Concorde.