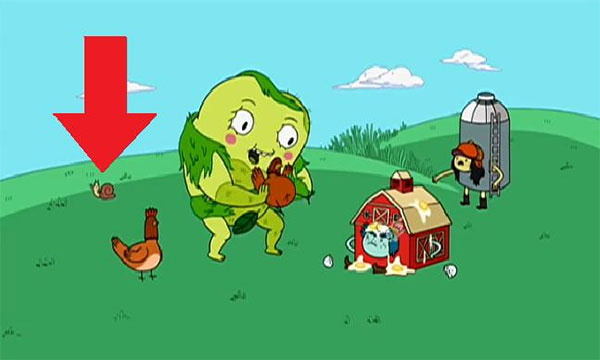 Adventure Time is an American children's cartoon that airs on Cartoon Network. It features stories of the adventures that the main character, Finn, and his adoptive brother embark upon.

In each episode of Adventure Time, there's a tiny snail that's discretely inserted into various scenes of the show. Its appearance is a running gag by the animators.

In the episode 'Mortal Folley' the snails role becomes more prominent when the Lich takes possession of the snail and, with its aid, uses it to escape from prison.

The snail again takes a pivotal role in "Mortal Recoil" when the Lich again takes possession of it after releasing Princess Bubblegum from under his control.

It also plays a role in the stories of the episodes "Storytelling", "In Your Footsteps", "The Lich", "Up a Tree", and "Sad Face".

In "Sad Face", it is revealed that it is part of a traveling circus and does a jumping act into a bucket.

It has also appeared in other media, such as the games Righteous Quest 2, FusionFail, and Legends of Oooo, and the Adventure Time comics.