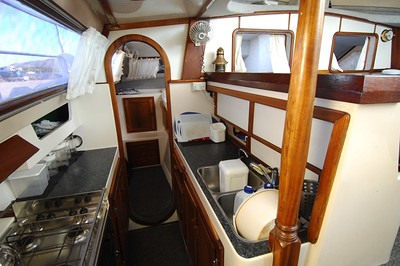 On the 15th of April, 2007, Derek Batten and his neighbours, two brothers named Peter and James Tunstead, embarked upon the first leg of their journey that would've seen them sail from Northern Australia to Western Australia. In circumstances that remain a mystery, they did not make it past the first leg, and their yacht - the Kaz II - was found adrift with nobody on board.

The drifting vessel was first spotted by a helicopter on the 18th of April, which reported that the crew may be in trouble. It wasn't until the 20th of April that the coastguard finally caught up with and boarded the boat.

They found that almost everything was normal; as if nothing catastrophic had happened and the crew were still on board. The engine was still running, a laptop was still on, the radio and GPS were working, and food was still set out to eat. The life jackets were where they should have been and a small boat was hoisted on the stern. The only evidence contrary to normality was that there was no life raft, and one of the boat's sails had been badly torn. However, there may never have been a life raft on board in the first place.

What they found was a bit strange in that everything was normal; there was just no sign of the crew."
- Jon Hall, Queensland's Emergency Management office.

A camera that was found on the boat contained footage from the 15th of April, but everything appears normal: The yacht was helmed by Batten, Peter was fishing, and the engine wasn't running. However, the sea was choppy and none of them were wearing life jackets. The fenders were also out.

The yacht was thoroughly searched and investigated by a forensic team, but they found no evidence of foul play. After much probing and deliberation, the investigators were unable to draw a firm conclusion on what happened, but a hypothetical conclusion was drawn:

"On Sunday, 15 April 2007, at 10:05 A.M., the Kaz II was sailing in the vicinity of George Point. Up to that moment everything was going as planned but, in the following hour, their situation changed dramatically. The men hauled in the white rope that was trailing behind the boat and bundled it up on the foredeck, possibly to dry, next to the locker it was normally kept in. For unknown reasons, James Tunstead then took off his T-shirt and glasses and placed them on the backseat. The report says that since the men's fishing lure was found entangled in the ship's port side rudder, an obvious explanation would be that one of them tried to free the lure and fell overboard while doing so. Standing on the boat's 'sugar scoop' platform (a platform at the back of the ship close to the waterline) while the boat is moving is perilous and falling in the water is easy, but getting back aboard almost impossible. One of the other men then came to the rescue of his brother, while Batten, still on board, started the motor and realized he had to drop the sails before he could go back for his friends.

As he left the helm to drop the sails, a deviation of the ship's course or wind direction could have easily caused a jibe, swinging the boom across the deck and knocking Batten overboard. This could even have happened before Batten was able to untie and throw out the life ring to his friends. A blue coffee mug found near the life ring may support this. Since the boat was travelling before wind and at a speed of 15 kn (28 km/h), it would be out of reach of the men within seconds. The report states: "From that point, the end would have been swift. None of them were good swimmers, the seas were choppy; the men would have quickly become exhausted and sunk beneath the waves."

There are several other explanations. One suggests that the fenders were another clue:

The fenders were out on their yacht, and the only reason you ever put them out is when another boat comes aside or if you come to rest against a wharf.

Unfortunately, it remains a mystery to this day and we may never know what actually happened to the crew, unless new evidence surfaces.