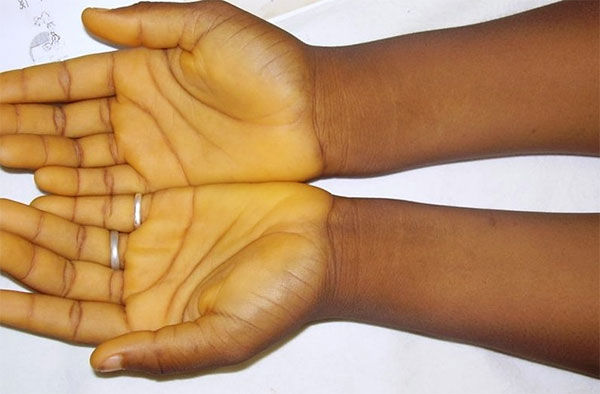 You may have heard the saying "too many carrots will turn you orange" - and it turns out that it is definitely possible. In fact, it's known in the medical community as carotenemia.

It is caused by an influx of beta-carotene into the blood stream after eating beta-carotene-rich foods such as carrots, pumpkin, and most yellow/orange vegetables. Also, foods like Kale, kiwi, cabbage, have high levels of beta-carotene.

The carotenoids are a contributing factor to the way our skin appears, but sufferers of carotenemia receive excessive deposits of beta-carotene into their skin which turns them orange - until the body naturally clears it away.

The condition is harmless and the orange taint to the skin usually disappears when consumption of offending foods is ceased. In extreme cases, skin can take up to several months to return to its normal colour.

It most commonly occurs in vegetarians, as common sense would dictate, but young children also seem to be more susceptible to it as well.