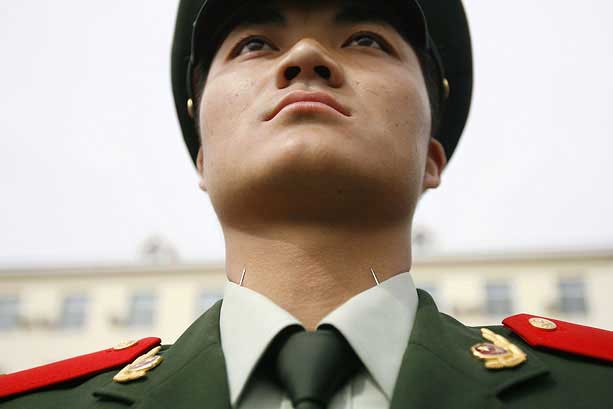 A pain in the neck, so to speak, or a brilliant, if not dangerous way, for keeping one's posture in check?

It was reported in 2012 that members of the pressure for perfection was so intense before the National People's Congress that was being held in Beijing on the 5th of March that year, many of the paramilitary police were witnessed placing pins in their collars to ensure that they did not let slip (..ouch) their 'perfect posture' while on parade.

The pins were placed in such a way that the uniformed men's heads were angled at a uniform degree. The consequences of breaking the synchronization could be potentially grim as some of the pins were snapped on camera, by curious onlookers, in precarious places, such as right next to the vital jugulars in the neck.

Other measures were also reported, such as hats being worn upside down (see top picture). Ostensibly, this was to display the focus and balance of the men in uniform, although the purpose of such an act is left to speculation as we can find no official explanation.