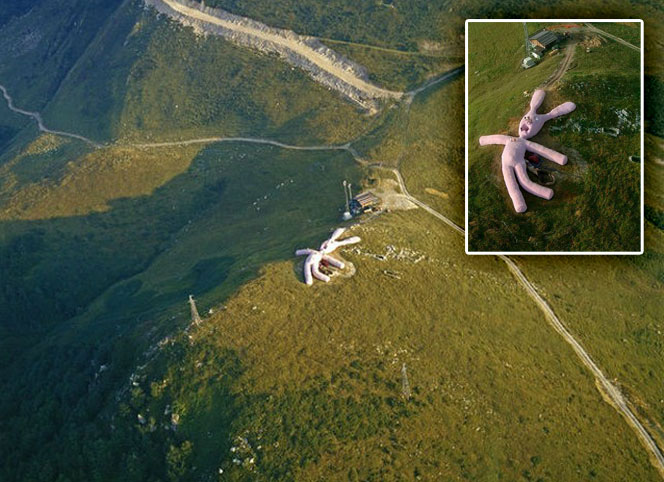 There are some amazing landmarks that are visible from on the ground and in the air. Some were made by our ancestors so that, perhaps, they could receive good fortune from the Heavens above.

However, pass over one hilltop in Italy and you'll witness one of the weirdest human-made things visible from the sky: a giant pink bunny that has its entrails 'spilling out' of its body.

Called "Hase" (or "hare"), the mortally wounded giant pink bunny appears to have fallen from the sky and is even visible on Google Maps.

It is a 55-meters long and 5-meters thick knitted creation by the Vienna art collective 'Gelitin', holding the purpose of make passers-by feel "as tiny as Gulliver did in his travels". The hill it is perched on is called Colletto Fava.

Hase is handmade out of fabric and straw, and is expected to fully degrade by 2025. Before then, he can be reached from Artesina, Piedmont, in Tuscany, Northern Italy.

Passing hikers are encouraged to climb atop Hase and make themselves comfortable on his soft, cushioned body (or entrails.)