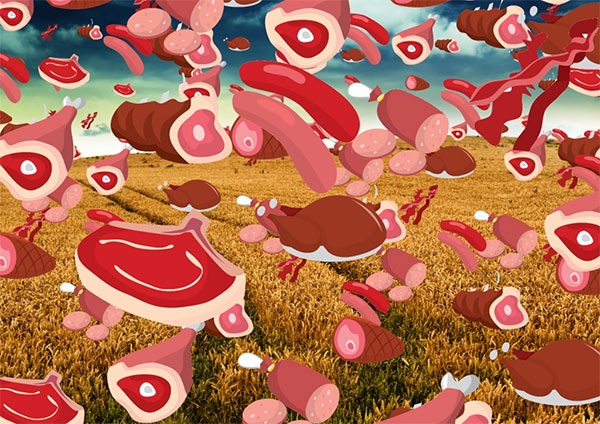 On March 3, 1876, unsuspecting residents of Olympia Springs, Bath County, Kentucky, witnessed a very peculiar phenomenon where large pieces of red meat fell down from the sky.

The mysterious meaty shower was picked up by the New York Times and several other tabloids. It was reported that the meat-fall lasted for a period of several minutes and landed in an area that's approximately 100 by 50 yards.

Residents reported that the meat had the appearance of beef, but two audacious residents who actually tasted it claimed that it tasted like mutton, venison, or lamb.

Tests by the Newark Scientific Association in the Medical Record concluded that the meat was lung tissue from either a horse or a human infant. Subsequent tests also identified muscle tissue and cartilage.

There have been many likely and unlikely explanations for this phenomenon, but the most likely is that a large pack of buzzards, after eating freshly dead horses, flew over the area and disgorged themselves, which apparently is customary when one bird in the pack does so.

Out of the unlikely explanations, one suggested that it was "cosmic meat" that was floating around in space and occasionally drops through the atmosphere like meteorites.