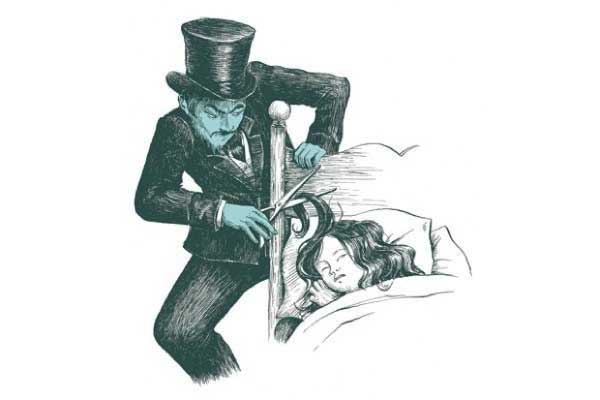 During the early days of World War 2, there was a surge in population for the small fishing town of Pascagoula in Mississippi because of the warship construction that took place there. The town's population surged to 15,000 from a mere 5,000 in a short duration. The small police force struggled to cope with the expected increase in callouts that the surging wartime population. Amist all this, a peculiar criminal was birthed. Dubbed the 'Phantom Barber', the sneaky scissor smenace broke into people's homes and, instead of stealing items (or worse), he cut their hair.

Starting on June 5, 1942 - a Friday - his first victims were two young ladies at the Our Lady of Victories convent, called Mary Evelyn Briggs and Edna Marie Hyden. They awoke during the night to find a man creeping out of their bedroom window. Aside from being extremely terrified from the ordeal, they were unharmed... except for the fact that the Phantom Barber had cut a lock out of each of their hair. He was described as "sorta short, sorta fat, and he was wearing a white sweatshirt".

It didn't stop there. His next victim was 6-year-old Carol Peattie, whom he snipped the very next Monday, as she laid fast asleep next to her twin brother. This time, he was less careful and left a sandy footprint close to the window.

There were more sinester attacks to follow - one where he attacked a couple with an iron bar, the other where his victim became violently ill after it was suspected he used a chloroform rag to subdue her.

Residents lived in fear for months, afraid that the Barber might strike, though a quiet period ensued withouto incident. Months after the last atacks, police suddenly announced that they had caught the Barber, who they named as William Dolan, a 57-year old local chemist. He insisted that he was innocent, but despite this, he was sentenced to 10 years in prison after being found guilty of attempted murder. However, there are reasons to believe that he may not have been the Barber, and none of the charges related to the midnight hair thefts.

Years later, he took a lie detector and passed. Subsequently, he was released and the Phanton Barber's true identity remains a mystery to this day.