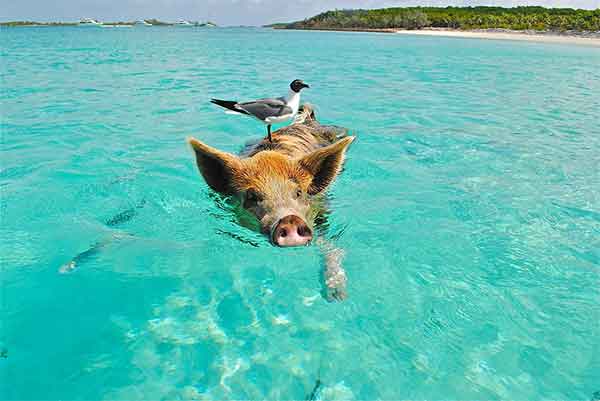 Pig Beach is an uninhabited island located in Exuma, the Bahamas. Uninhabited except for around 20 swimming feral pigs!

There are many theories about how the pigs arrived on this beach. One theory is that the pigs were dropped off by a group of sailors who would return to cook the pigs. However, the sailors never returned and the pigs lived on. Others speculate that the pigs were survivors of a shipwreck and managed to swim to shore, while others simply think that the pigs were put there as a ploy to attract visitors.

The pigs have survived partly due to the three freshwater springs and all the tasty food tourists bring.

Swimming with pigs has now become a popular tourist attraction in the Bahamas and is classed as an aquatic activity along with snorkelling with tropical fish and sea turtles. Although the pigs are feral, they are extremley friendly and run out to greet visitors.

There are around 20 pigs and piglets on the island. Accompanying them, there are also a few feral cats and even some goats.